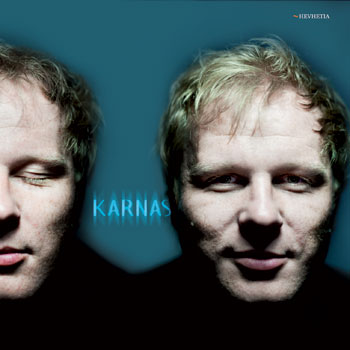 This is the fourth album by Polish Jazz vocalist / composer / arranger Grzegorz Karnas, one of the most unique and talented representatives of the young generation of the local Jazz scene. Separated by five years from its predecessor "Ballady Na Koniec Swiata", this album is significantly different from his earlier work and presents several novelties as far as his recording career is concerned, for example the inclusion of songs not composed by him, usage of lyrics in several different languages, a new instrumental concept, etc. The singer is accompanied by a splendid quartet, which features pianist Michal Tokaj, cellist Adam Oles, bassist Michal Jaros and drummer Sebastian Frankiewicz. Except for the bassist the other three musicians are long time collaborators on his earlier recordings. The presence of a bassist allows Oles to play his cello more in the way it was originally intended, as opposed to the earlier recordings, where it was mostly playing the bass parts.

The album comprises of no less than nineteen tracks, some quite short (under a minute) and other fully developed and lasting around seven minutes. One song (Laurie Anderson´s "Langue D´Amour") appears four times in different incarnations and two other songs are reprised. Karnas composed or co-composed six of the pieces, four other pieces are credited to the band accompanying him, one is an instrumental composed by Tokaj and three are songs from the canonic Rock repertoire like Sting´s "Roxanne", Joni Mitchell´s "Black Crow" and the a.m. song by Laurie Anderson.

It is immediately obvious that this is Karnas´ most ambitious album to date. The complexity and versatility of the material is overwhelming and music moving from one theme to another creates a charming flow, which makes the listener whish for it never to stop. Instrumentally this album, with Tokaj taking over the role of the main soloist, is finally perfect and Tokaj´s beautiful tango is the best original piece of music on the album. Oles finally shows what he´s made of and plays some amazing sounds. The vocal performances are also excellent, obviously more mature and relaxed than ever before. This time Karnas is pretty minimalistic, not trying to overemphasize his part and treating the entire project as a whole rather than another solo album. The group effort is definitely what makes this album tick so wonderfully and takes it a few notches up the scale.

Overall this is a truly amazing vocal Jazz album, which plainly stands out as an artistic achievement, leaving most other albums of its kind way behind. Suffice to listen to the vocalist´s interpretations of the three well known songs, in order to appreciate his originality. Add to this the strength of his original material and Karnas emerges as an artist worth following and already leaving his mark on the contemporary scene, with very few contenders. An absolute must!
Adam Baruch
www.adambaruch.com/reviews

Vocalist Grzegorz Karnas's latest album, titled “Karnas”, is a one-of-a-kind mixture of 'borrowed songs' and original compositions by this outstanding alternative performer, whose creativity draws from a broad range of musical genres which, by virtue of his tremendous expressiveness, unique lyrics and exquisite playing on the part of the band, are fused into a single, coherent, jazz-based whole.
--------------------
review by Maciej Nowotny
polish-jazz.blogspot.com

Karnas (Hevhethia, 2011)
After years of hearing close to nothing interesting from Polish male jazz singers I must admit that recently I am discovering some interesting projects from them at last! One of the albums I am waiting most impatiently for in Polish jazz is one planned by Oleś Brothers and vocalist Jorgos Skolias (check this link for more info) for Tzadik Records. But this one, released just couple of days ago by Hevhetia, Slovak record label, though unexpected brings pleasant surprise indeed. All due to vocalist Grzegorz Karnas who managed to record album intriguing, forward-thinking and challenging.
Grzegorz Karnas, born in 1972, graduated from well-known Jazz Faculty at Katowice Music Academy and has already recorded three albums starting in 2000 with "Reinkarnasja" for Not Two followed by "Dreams" in 2004 and "Ballads For The End Of The World" in 2006 issued by his own Ninth Floor Production. Honestly I cannot say much about his previous CDs since I simply got no opportunity to listen to them. But basing on this album I find his voice mature, his conceptions daring, his taste refined. He strives to imitate nobody, he is searching for his own sound and he succeeds in this not least through excellent choice of his fellow-workers. Mikołaj Tokaj is one of best pianist in Poland and permanent partner of allegedly the best Polish female jazz singer Aga Zaryan (check her "Looking Walking Being" and "A Book Of Luminous Things"). But Adam Oleś on cello, Michał Jaros on bass (very good on recent debut disc "I Remember" by pianist Michał Wróblewski) or Sebastian Frankiewicz (very active and present on recent albums by Przemek Strączek, Dominik Bukowski, Joanna Gajda or very interesting "Hendrix Piano" by Artur Dutkiewicz) are equally good support.
Going back to music, this is nothing close to typical jazz singing, though we find here marvelous version of Sting immortal cover "Roxanne" but otherwise it is laborious search for what is "new land" in jazz singing. Although sometimes irritant (as any avantarde effort usually are), I do not want to hide it, sometimes it is simply breathtakingly beautiful like on "Fin d'ete" but always free in spirit and thus earning my respect. Worth-checking!