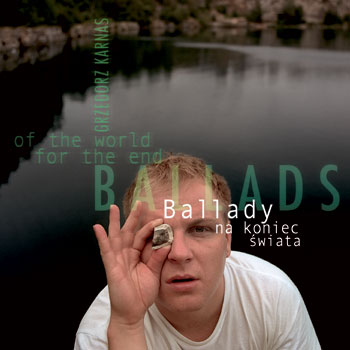 ballads for the end of the world

This is the third album by Polish Jazz vocalist / composer / arranger Grzegorz Karnas, one of the most unique and talented representatives of the young generation of the local Jazz scene. Born in the southern Polish province of Upper Silesia, Karnas graduated form the Jazz Institute at the Katowice Academy of Music, where a large percentage of the young Polish Jazz musicians get their initial graduate education. His debut album "Reinkarnasja", released in 2000, created quite a stir on the local scene and immediately established him as one of the most significant newcomers.

Stylistically this album is a direct continuation of its predecessor "Sny", except for the fact that all the music was co-composed by Karnas and cellist Adam Oles (who also plays on the album) with lyrics by Karnas. The thirteen pieces are all relatively low-key, hence the reference to ballads in the title, although they have little in common with what is considered a ballad in classic Jazz other than the slow tempo. The accompaniment is also more subtle than on the previous album, with more ambient background sounds and less typical Jazz solos. Oles, who plays his cello mostly as if it was an acoustic bass, sets much of the overall sound and atmosphere. Other participants include saxophonist Radoslaw Nowicki, keyboardist and electronic sounds creator Tomasz Kalwak, and congas player Bogusz Wekka. In addition two guest artists also participate: pianist Michal Tokaj and guitarist Damian Kurasz.

Karnas apparently found in Oles an ideal partner in his search for a decisive stylistic crystallization, which is quite apparent here. His vocal explorations are less chaotic and outrageous, with spontaneity replaced by self-control and moderation, which of course does not make his music any less exciting. But this album is somewhat less accessible and immediately likeable that his earlier work, perhaps due to the depressing lyrical subject matter (end of the world), which is apparent not only in the lyrics but also in the somewhat gloomy melody lines. All in all this is definitely another excellent piece of musical artistry.

Karnas is a unique voice and everything he recorded is worth the listeners´ attention, especially since vocal Jazz is such a neglected area dominated by mediocrity if not worse. Therefore this album stands out as a beacon of hope that not all is lost and the end of the world will have a wait for a while. Exciting stuff!
Adam Baruch
www.adambaruch.com/reviews

Karnas is something completely different.
First of all, I know him - even personally - and his new album is something that I take into my hands with interest. This is the third that I've gotten from him, and thus far Karnas has never failed to surprise, to my great enjoyment.
Karnas penned all of the lyrics, though they might more aptly be called loose assemblages of thoughts than lyrics in the classical sense of the word. The individual pieces are not songs; sketches, or outlines would be a more accurate term. Don't look for verses or refrains here. This album simply develops as a whole, gradually, going through successive phases with a brief instrumental solo appearing from time to time, after which it ends.
Karnas produced this CD as well. The composing work was shared with Adam Oleś, who plays on the album too. The instrumentation of the accompanying group is also distinctive - although actually, it's not so much an accompanying group as it is musicians who, collectively, enable Karnas to better express his thoughts. Tenor sax, cello, and percussion instruments - that's all. Fender-Rhodes electric piano and guitar make no more than guest appearances.
I used the word "concept" earlier, and I'd like to return to it because it is the word that probably best depicts the nature of the entire album. I get the impression that Karnas knows exactly what he wants - and what's more, that he was able to realise his intentions here. This feeling emanates from the music itself, from the certainty with which he embarks upon his experimental, uncharted digressions, momentarily resuming his initial train of thought.
Karnas is an exceptionally fine singer - although that designation doesn't fully reflect the quality of the project, the whole of which he subordinates his vocal talents to. This album is the result of well over a year's work on his part, realised between 2004 and 2005, and bears witness to the fact that projects such as this one are much more than just the result of musicians casually meeting in a recording studio. I'd like to record an album of this sort myself, but I won't even attempt to do so, due to the fact that - among other things - I'm also an admirer of the common song.