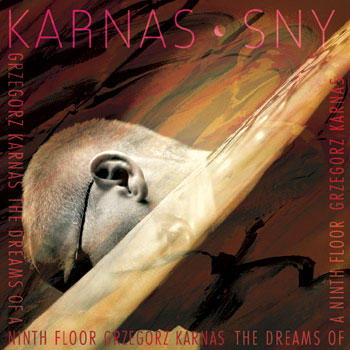 dreams of a ninth floor

This is the second album by Polish Jazz vocalist / composer / arranger Grzegorz Karnas, one of the most unique and talented representatives of the young generation of the local Jazz scene. Born in the southern Polish province of Upper Silesia, Karnas graduated form the Jazz Institute at the Katowice Academy of Music, where a large percentage of the young Polish Jazz musicians get their initial graduate education. His debut album "Reinkarnasja", released in 2000, created quite a stir on the local scene and immediately established him as one of the most significant newcomers.

The album consists of twelve pieces, ten of which were written (music & lyrics) by Karnas, one was co-written by Karnas and Oles and one is a standard. Karnas wrote all the arrangements, which are quite unusual and beautifully atmospheric. Of course Karnas´ vocal performances are the focal point of the album, but his ability to involve all these wonderful players to become an integral part of the overall result is absolutely astounding. Szukalski plays wonderfully here, but for me Tokaj and his incredible electric piano phrasing are the cherry on the cake.

Karnas is a unique vocalist, a power of Nature. Although many of the tricks of the trade he so skillfully utilizes can be traced back to other great vocalists, like the great Bobby McFerrin and the Polish diva Urszula Dudziak, but he is truly original. First and foremost he completely disregards any conventions, allowing himself a total freedom as far as his vocal expressions are concerned. Regardless if he sings lyrics, vocalese, scat or just utters sounds from his throat, there are no rules involved. His pronunciation of the lyrics is completely off the wall and probably would give his primary school Polish language teacher a heart attack, but the effect is overwhelming. He also twists the melody any way he wants and his disregard of "proper" timing is simply scandalous; and yet all these elements put together create an amalgam, which is just so beautiful and intelligent, that any experienced music connoisseur simply melts away.

Vocal Jazz or more exactly interesting and challenging vocal Jazz is unfortunately a rarity on contemporary Jazz scene and therefore any Artists of the level presented by Karnas is a most welcome addition. People who truly love music will love this music immediately and unconditionally. Not to be missed!
Adam Baruch
www.adambaruch.com/reviews

This CD is a surprise for me – a surprise in every positive respect. Through his new album, Grzegorz Karnas has become, for me, one of those musicians who have transcended the thin barrier that separates craft from art. “Dreams” is not just an album that makes for excellent listening - it's also something different, that stands apart from the omnipresent mass of standardised products out there. Karnas' methods are nothing new (can you still do that?!), and fit into the category generally known as fusion, incorporating a mixture of acoustic and electronic sounds, and elements of jazz, rock and world music. However, even though one can hear strains of Davis, Steps Ahead, and – probably most of all – Joe Zawinul on “Dreams”, Karnas' music is original enough to bring a revitalising gust of freshness into the somewhat stale genre of jazz-rock. The compositions are excellent - very melodic, making the listener want to give the music their attention and time. The arrangements are characterised by meticulous blending of sounds and a feel for timbre; though the instrumentation is at times dense and multi-layered, the music isn't overloaded, each sonic element is meaningful and resounds lucidly with the rest.
The top-rate crew of backing musicians gives a lively but relaxed performance, obviously in tune with the leader's intentions. Thanks to this, the music continually blossoms with a wide array of sounds, the successive, stirringly played improvisations flow forth, the moods range from ballads to trans-like excursions.
Karnas' singing – regardless of whether it's lyrics, syllabics or scat – is never for show; it's always music. Vocalists are probably a bit more susceptible to the lure of “shining” at all costs than are other instrumentalists. Karnas doesn't care about shining. He wants to make music. This is audible in every composition, in every measure he sings. Karnas should also be appreciated not only for talent and vision, but for will-power, self-control, and possessing the level of humility that's essential to keep art from becoming a spectacle.
The remaining aspect for assessment is Karnas the poet. I decidedly do not consider myself an expert in that field, but in my opinion this area of “Dreams” is rendered with sufficient intelligence, honesty and perspective to stimulate the ear and mind.